HOW TO IMPLEMENT IT?

Fill in our consultation request form

Get reply within 24 hours

Our surgeons will analyze the photos and prepare an offer for you.

Come, operate and get a new look.

DURATION OF THE OPERATION

Taking out of thread

Consult for a meeting

The ear shape just like their size, is determined before birth, children often inherit drooping ears from their parents or grandparents. The ear can be drooping because of the undeveloped, irregular antihelix or excessively large ears.

Most often it is carried out under local anesthesia. The skin incision is made behind the ear, usually by removing a strip of the skin. The antihelix fold is formed, softening the cartilage and closing its softened fragment. A large ear (cartilage) is attached with special stitching to the area behind the ear, as well as the ear drooping angle is changed. The skin behind the ear is closed by the “internal” seam, which is removed after 7-8 days. 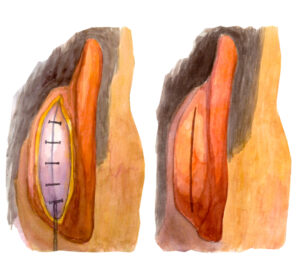 Ear cartilage seam Seam of the skin behind the ear

Ears are dressed without covering the face. At home it is advisable to lie on the back with the raised head. The next day, the change of dressing is recommended. Later, the patient wears ear bandage for 7 days. A week later, after removal of sutures, ear dressing is no longer necessary, but it is recommended to put a band on the ears at night for a further 2 weeks.

Drooping ear surgery as well as any intervention may have some reaction to the anesthesia, temporary swelling, a feeling of tension, post-operative pain and bruising. Very rarely, bleeding, wound infection, scar hypertrophy may occur.